The Ahmet Ertegun Tribute Concert was a benefit concert staged in honor of Ahmet Ertegun, co-founder and former president of Atlantic Records. Ertegun was integral in signing Led-Zeppelin to Atlantic Records. On September 12th, 2007, during a press conference held by promoter Harvey Goldsmith, it was announced that the surviving members of Led-Zeppelin would reunite, along with John Bonham’s son, Jason Bonham, for their first full length concert in the death of John Bonham and the dissolution of the band. The proceeds from the concert were used to fund the Ahmet Ertegun Education Fund, a scholarship program that pays for university scholarships in the UK, the US and Turkey, Ertegun’s home country.

Tickets were made available through an online lottery system through the concert website but due to the immense demand the website exceeded its bandwidth allowance and crashed almost immediately upon tickets being made available. Claims were made that over one million people attempted to purchase fewer than 20,000 available tickets. The concert was initially slated to take place on November 26th, 2007 but after reports that Jimmy Page had taken a fall in his garden and injured his pinky the concert was pushed back to December 10th, with the venue being selected as the O2 Arena in London.

It is also important to note that other opening acts were scheduled to play the concert as well. A super group formation consisting of Keith Emerson, of Emerson, Lake & Palmer, Chris Squire and Alan White of Yes and Simon Kirke of Free and Bad Company. Also performing was Bill Wyman’s (of the Rolling Stones) Rhythm Kings, Paul Rodgers of Free and Bad Company, Paolo Nutini and Foreigner. Pete Townshend was also scheduled to perform but declined when hearing of Led-Zeppelin’s reunion. A recently reunited Cream was also considered as a headliner.

Led-Zeppelin’s official return to the stage came after several sporadic appearances across the previous decades that the press, fans and even the band members have described as shambolic. The Led-Zeppelin that appeared at the O2 was nothing short of prepared and up to the task. The first full length concert played since 1980 was a resounding success, with the band performing 16 songs in two hours across the spectrum of their career, save for their final album, In Through the Out Door. Initially asked to perform for 40 minutes, Page remarked it would be impossible and the band was given two hours to perform instead. Two songs never performed in their entirety in the seventies were also played for the first time, Ramble On which had been included in medleys in the early seventies and For Your Life, from Presence, which is stated to have only been played once, when it was recorded.

Critical response to the performance was unanimous, even from sources that lambasted the group decades earlier. Calls for further shows and tours were quick to follow, with promoter Goldsmith claiming the ensuing demand for a tour and tickets for said tour would break records worldwide. In fact, in preparation, box offices all over the world began printing tickets for an ensuing announcement of a full-scale reunion that never came. With most reports stating Robert Plant’s lack of willingness to do more than one show. Since then no more reunions have taken place and yet speculation continues 12 years later.

The show was professionally recorded and filmed with producer and guitarist Page stating there were plans for an official home release, but no plans were currently in place and that reading the recordings for release would be “a massive job to embark on.” On September 12th, 2012, almost five years after the concert took place, an announcement posted on the band’s Facebook page led fans to believe that the release of the concert was imminent. On October 17th, the recording, titled Celebration Day, was made available in select theatres and a month later was released on DVD and BlueRay. 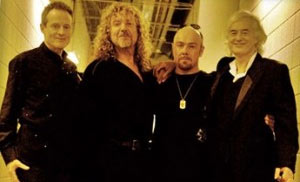